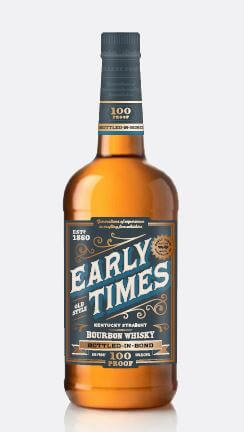 The company said it’s a tribute to the 75th anniversary of the original Early Times bonded bourbon recipe, a product that helped shape the industry after Prohibition.

And by the way, that’s not marketing BS. Early Times was actually the No. 1-selling bourbon in the 1950s and successfully won a challenge against Old Stagg in private government meetings to prove it sold the most cases. (That’s a big sidebar in Bourbon, if you’re interested.) Back in those days, government agents required whiskey brands to prove their advertising claims.

Since then, Early Times died a slow bourbon death and eventually became a Kentucky whiskey, which was partially stored in used cooperage. Early Times 354 made a brief “bourbon” comeback a few years ago, but was quickly discontinued after poor sales. That said, this is a nice tribute to a brand that was once mighty.

Early Times introduced a bonded bourbon in the 1940s.

It will be available next month in Kentucky, Ohio, Indiana, Illinois, Michigan and Oregon for $22.99 per 1-liter bottle.